The Men Who Made Liverpool: Sam Raybould, the Reds’ first 100-goal striker

The list of players to score over 100 goals for Liverpool is below 20, and as Jeff Goulding continues his Men Who Made Liverpool series he profiles the very first, Sam Raybould.

It’s 1900, and the Second Boer War has helped secure the Conservative party a victory in what was dubbed the ‘khaki election’. Winston Churchill is elected to represent the Oldham constituency, and the newly formed Labour party sees two of its candidates elected to parliament: Keir Hardie in Merthyr Tydfil and Richard Bell in Derby. The government had only just got round to deciding that children shouldn’t work in mines and arsenic poisoning in beer kills 70 people in the north-west of England.

Meanwhile, in the Second Division of English football, outside-right Sam Raybould, playing for New Brighton Tower, is attracting the attention of Liverpool scouts.

Born in 1875 in Chesterfield, Raybould is already something of a veteran at the age of 24. He had by now played for six different clubs, including Derby County, before arriving on Merseyside. And he was something of a goal machine. In just 13 games for New Brighton he scored 10 goals. Tom Watson, the Liverpool manager and a man with an eye for talent, had seen enough. Liverpool would pay the Second Division outfit £250 for his services.

Watson’s Reds had been on an upward trajectory since he took over in 1896. They had narrowly missed out on the championship of the First Division to Aston Villa at the end of the 1898/99 season. Perhaps the Reds’ manager felt he needed a goalscorer. His men had managed an impressive goal average of 1.48 per game but Villa’s average of 1.9 took the spoils. Watching Raybould score for fun in the second tier of English football, ‘Owd Tom’ immediately saw a new Liverpool centre-forward in the making. The switch in position would eventually prove a masterstroke.

Sam made 11 appearances for Liverpool during his first season at the club, scoring seven times. His first game came in a 2-0 win over West Bromwich Albion at Anfield, on January 13, 1900. Hugh Morgan would get both goals for the Reds that day, and Raybould had been noticed for all the wrong reasons. In a report featured in the Lancashire Evening Post, the gentlemen of the press detected a hint of nerves may explain his profligacy in front of goal:

“Raybould did not make an altogether successful first appearance for Liverpool against West Bromwich Albion.

“He missed two glorious open goals – worked for them hard, worked his way right up to Reader, and then failed to score in the simplest fashion.

“It is that final touch, though, that shows the true artist.”

The last sentence suggests they had spotted real potential and the rest of the match report is somewhat sympathetic, with favourable comparisons to the great George Allen who had scored 56 goals in 96 appearances for the Reds. The match report noted:

“He is the most likely successor to George Allan that Liverpool have yet had.

“He will not make the local public forget Allan – they cherish his memory too much for that. But I rather think the recollection of the Kyles and Hunters has been blotted out, and that Raybould will prove to be that centre-forward for whom Liverpool have been searching high and low.”

The Liverpool Mercury overlooked Raybould’s wastefulness and preferred to focus on his contribution to the team overall, and felt that he had helped the team completely “overrun” the visitors. Liverpool had scoured the country for a new forward, and yet he had been lurking across the water, on the Wirral, the whole time. Journalists noted the irony with some humour.

This was clearly a player of some ability and his capture was something of a coup. The following week he would line up against Everton at Goodison Park in front of 30,000 people. Unfortunately, Liverpool would succumb to a 3-1 defeat, but Raybould would bag his first goal in the first minute of the game.

The goal came after a shot from Alex Raisbeck was parried and Raybould profited from the resulting goalmouth struggle. Liverpool held on to their lead for 68 minutes, but three goals in six minutes saw Everton take both points. Sam would bide his time during the remainder of the season, and his breakthrough would come in the championship-winning season of 1900/01. 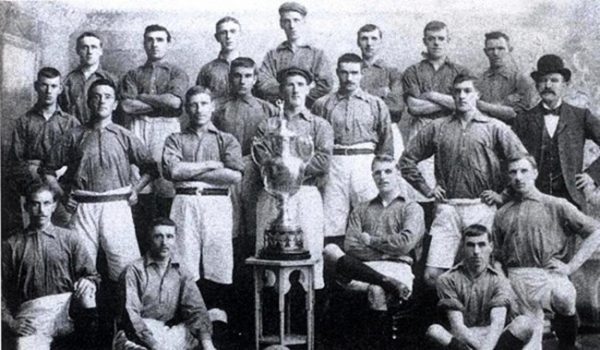 He would make 31 appearances as the Reds raced to their first-ever league title, scoring 17 goals. He was now a league champion and a firm favourite with Liverpool supporters, but there would be more to come in a career that would yo-yo between the First and Second Divisions.

Raybould would bag 31 league goals in the 1902/03 season—his best for the Reds. However, his career would then be mired in controversy when he became embroiled in scandal. Effectively, he would be accused of accepting a ‘bung’ to sign for Portsmouth along with fellow Reds, John Glover and William Goldie. After a lengthy argument, it was decided that the move was illegal and Raybould received a seven-month ban and was prohibited from ever signing for Pompey.

Liverpool missed him and by the time his ban was over on New Year’s Eve, 1903, they were locked in a fight for survival. The club, though, seemed to have forgiven his apparent disloyalty. An extract from an article in the Illustrated Police News from December 12, 1903, and published on playupliverpool.com, suggests Tom Watson had ensured nobody else could get his player by securing his return before any other club could swoop:

“There has been some secret rejoicing in Liverpool over the recapture of Samuel Raybould, who signed on again for Mr T. Watson last Tuesday, so that any other club would have to be very early astir to have ‘captured’ him again. Parkinson is admittedly a promising substitute but he is no Raybould.”

Though the club had clearly not crowed about the recapture of their star striker, perhaps conscious that his reputation had been tarnished, it’s easy to understand why Liverpool were so willing to forgive and forget. He had been an integral part of their success to date and Watson would have seen that he had no ready-made replacement in the wings. The reference to Jack Parkinson being “no Raybould” in the snippet above is clear evidence of that. 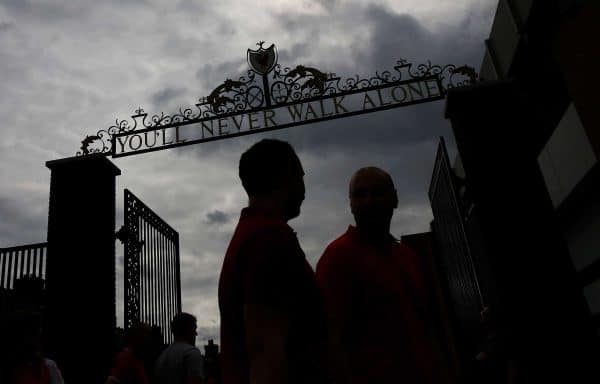 In truth, with football in its infancy, rules on transfers appearing to be vague, and wages precarious and relatively low, attitudes to players jumping ship may have been different then, at least when it came to their managers and fellow team-mates. Watson himself had indulged in poaching players from other clubs, most notably north of the border in Scotland—an activity he referred to as “hunting for men.” He may well have seen this sort of thing as all just part of the game.

It appears that supporters and others in the game of football saw things differently though. This is evidenced by a biography of Raybould published in a Liverpool match programme on December 17, 1904. The opening paragraph talks of Raybould receiving a huge amount of criticism:

“We know of no other player who has been so adversely criticised, and in our opinion so unnecessarily so, than Sam Raybould.”

It must have taken very broad shoulders for Sam to have returned to a club he had sought to leave, and to weather the barrage of criticism that came his way. Surely, the support of his manager and team-mates would have been critical. And, as we can see from the above quote, the club threw its full weight behind him too.

Raybould managed four goals in 15 games after his return. However, by now the team were in free fall and suffered relegation in 1904. It seemed life was crashing down all around him. At home, his marriage to wife Selina was in trouble. The pair had three children, and she was said to have been an alcoholic. Perhaps this played a part in him accepting an inducement to move to the south coast.

He would eventually successfully sue for separation in 1910, on the grounds that his wife was a “habitual drunkard.” Sam won custody of the children and agreed to pay Selina 15 shillings a week. These would have been incredibly difficult times for the family.

Nevertheless, with the help of Raybould’s exploits up front, Liverpool bounced back from the pain of the previous season by winning the Second Division title in 1905. And Sam’s appearances and goals had made a significant contribution. In all, he featured 32 times and scored 19 times. The club’s promotion set the scene for their second First Division championship in 1906. 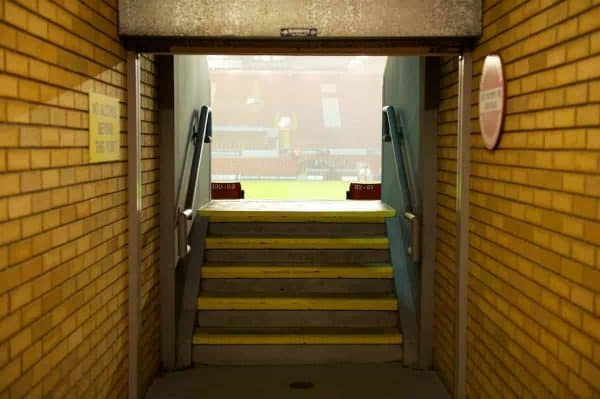 Sam would feature 25 times for Liverpool in that title-winning team and still weighed in with a very creditable 11 goals. The Reds had been worthy winners, having been crowned champions some four points clear of Preston North End. However, by now Raybould was almost 31 years of age. The following season would be his last at Anfield, before Watson transferred him to his old club, Sunderland.

Sam featured 35 times in the 1906/07 season and scored 15 league goals. He would continue his exploits in the north-east and undoubtedly Liverpool missed him. According to LFChistory.net:

“Raybould was a strong and powerful striker with a wonderful turn of speed, good ball control and was praised for his daring rushes up-field and judicious distribution of play to the wingers, but first and foremost, his deadly scoring capacity.”

He appears to have been an extraordinary player. So good, Tom Watson signed him twice, and forgave him for leaving the club for greener pastures. He became the first Liverpool player to score 100 goals and he managed that feat in 162 games. In all, Raybould scored 130 times for Liverpool, and he did that in a career that spanned 226 games.

Sam may have looked to leave Liverpool for financial reasons, but surely his goals-to-games ratio means we should let that go. At Anfield, he won two First Division titles and the Second Division once. I would argue that makes him one of the men who made Liverpool.

David James Claims There Is One Big...

Maldini: “We believed in the Scudetto, it’s...

Paolo Maldini and celebrating after winning the Scudetto at the end of Sassuolo-Milan at Mapei Stadium – Città del Tricolore on...
Read more

NikeWith the start of the UEFA Women's European Championship six weeks away, Nike has unveiled kits for several of the top nations competing at...
Read more