“Closer to the game, we start training for the opposition, so this is tweaking what we do to exploit the opposition’s weaknesses or tweak it to negate their strengths”.

That’s what Arsenal assistant coach Steve Round said in a recent interview, and it’s probably never been more obvious in practice than it was at Southampton on Thursday evening. Following on from two consecutive post-lockdown Premier League defeats, Mikel Arteta opted for a back five from the start of the game for the first time in his Arsenal tenure. Trained under Arsene Wenger and Pep Guardiola, you’d be forgiven for expecting the Arsenal boss to be a bit more dogmatic.

But Arteta took a leaf out of current Leeds boss Marcelo Bielsa’s book at St Mary’s. Bielsa always wants a spare centre-back, so lines up with a back three/five if the opposition play two strikers, and a back four if they play a lone striker. With Southampton starting Danny Ings and Michael Obafemi up top against Arsenal, Arteta opted to outnumber them.

Arsenal’s attacking approach also seemed to be deliberately catered to challenges specific to taking on the Saints. Rather than three central midfield players, Arteta left Granit Xhaka and Dani Ceballos alone in the middle of the park. Instead, the focus came on outnumbering Southampton out wide. Ralph Hasenhuttl likes to use a narrow 4-2-2-2 shape, a very narrow 4-4-2 where the wide players act more like number 10s. They make the game ugly and combative in the middle with energy and bodies, either dominating centrally or forcing opponents wide.

Arteta took that out of their hands by choosing to go wide. Arsenal have usually had the right-back tuck in when in possession, but Hector Bellerin stuck to the touchline on the right just as Saka did on the left, with Pepe and Aubameyang just inside them. The Gunners then doubled up on the wings, looking to play around the Saints’ narrow shape rather than through it. 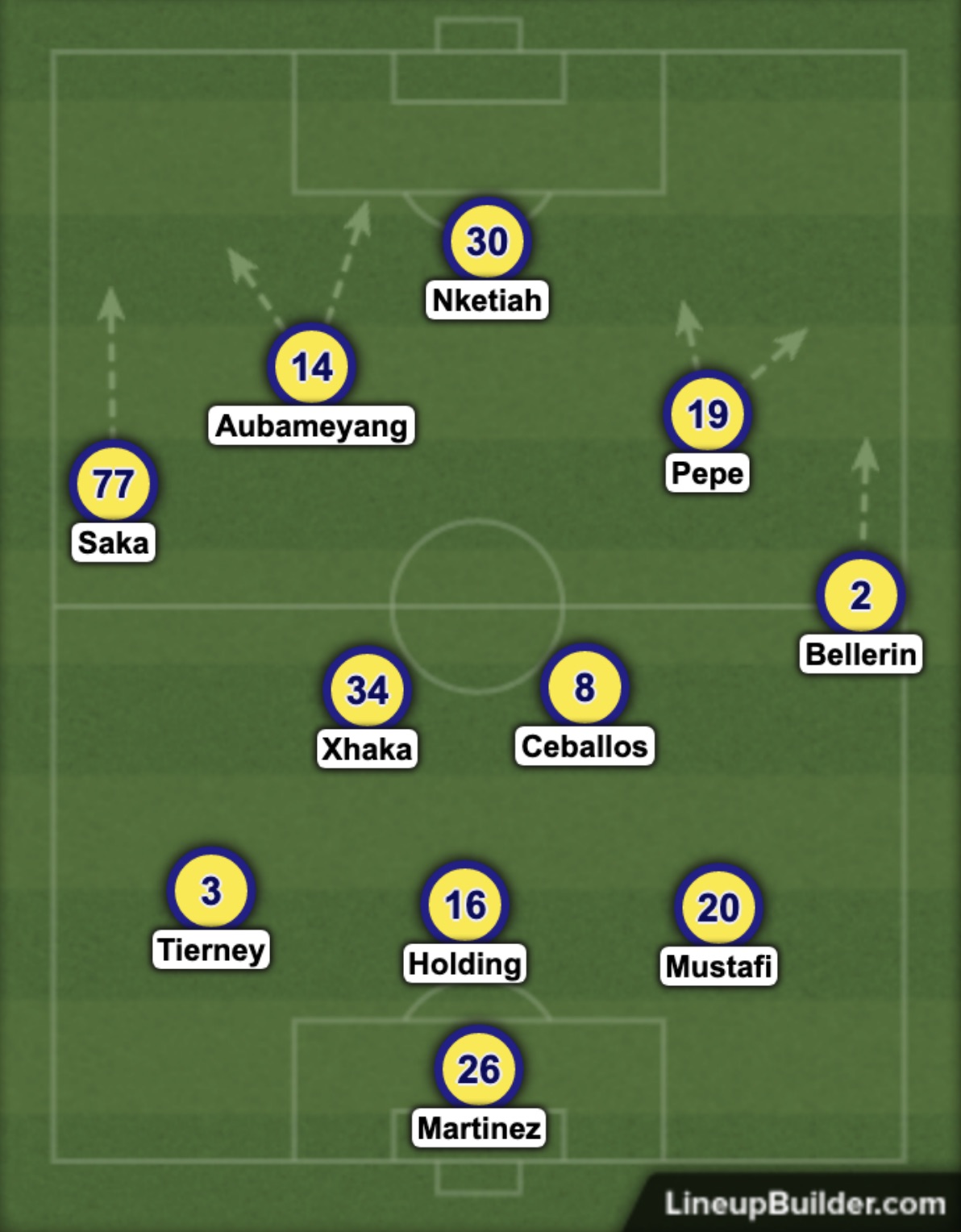 Despite the changes, there were clear constants. As much as the shape was different, Arteta’s teachings remained clear. The team played in two sections of five; a front five of Bellerin, Pepe, Nketiah, Aubameyang, Saka maintained width with good spacing across the final third. 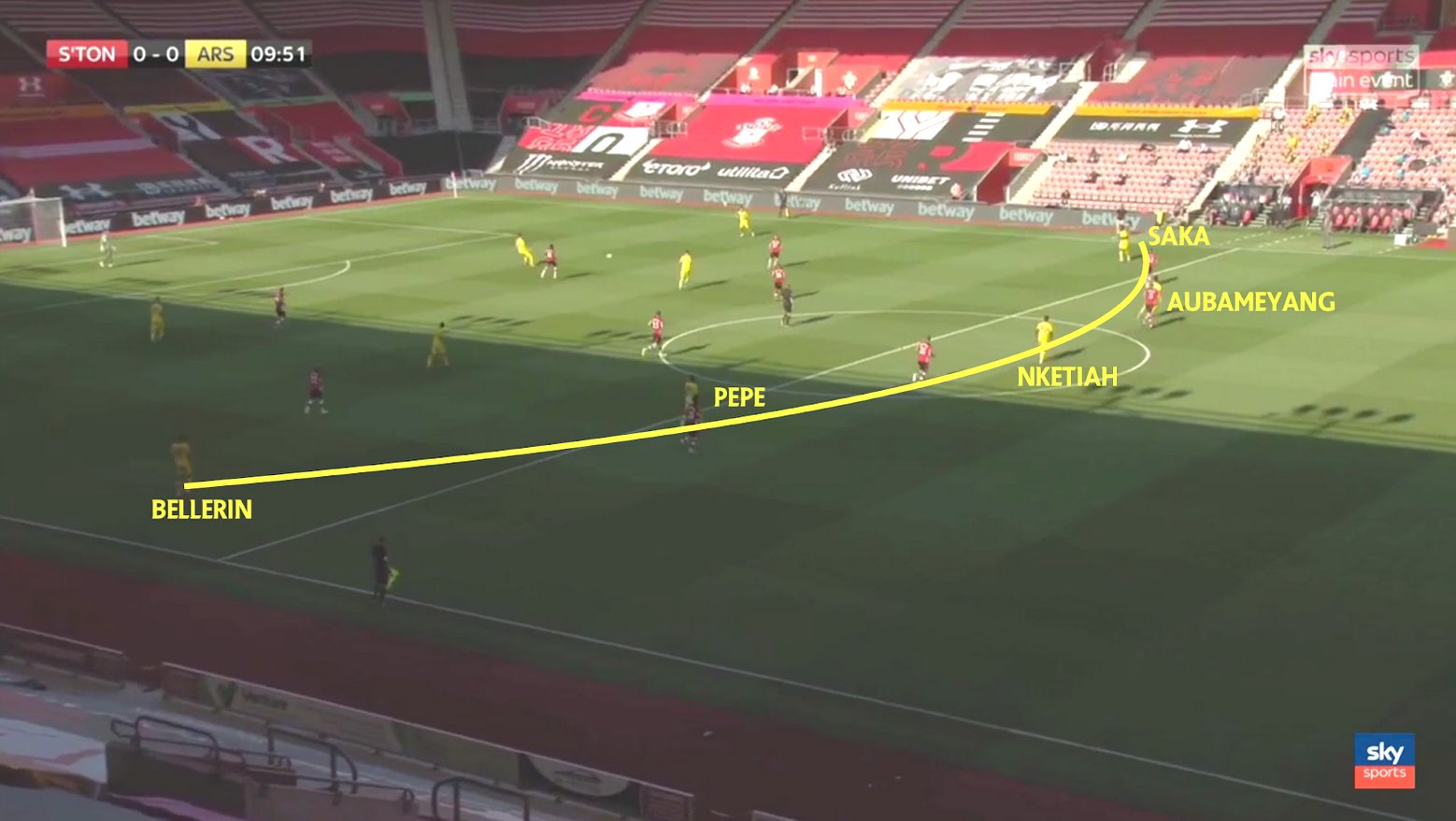 Aubameyang’s role was pretty much exactly the same as it has been, though he probably played even more centrally from his left-wing berth. Yann Valery had a nightmare not knowing whether to press Bukayo Saka or move inside so his centre-backs weren’t left one-on-one with Aubameyang. When he left Saka, the 18-year-old drove in behind and assisted Eddie Nketiah, only for the goal to be ruled out for offside. When he pressed Saka, Arsenal sent Aubameyang straight through on goal with a simple long pass, only for him to hit the underside of the bar

The Gabonese was a huge threat throughout and everything dangerous Arsenal did came down that left flank; there was also the spectacular long pass from Emi Martinez that sent Aubameyang in behind the Southampton defence shortly after half-time and he was unlucky not to tee up Nketiah for a tap-in.

Arsenal lost their way in the second half, with Arteta opting to stick with the back five and introduce Joe Willock, moving to a 5-3-2 after Southampton had taken full control of proceedings. The Gunners struggled to keep possession to calm the game down, a common theme this season, but battled well. With wins hard to come by, especially on the road, confidence is bound to be low and Arsenal are likely to continue to play well in fits and starts as they try to wrestle with Arteta’s instructions and their own instincts. But points will only reinforce that they’re on the right track.

Eddie Nketiah looked sharp leading the line and his goal was genuinely excellent. Obviously it looks like a clanger, and it’s undeniably poor from Alex McCarthy, but watch it back and it’s a move Nketiah forced on his own way before he taps in. A pass goes into midfield and Nketiah presses from the side, forcing the ball to go back to Jan Bednarek. He anticipates that and charges at Bednarek before the ball is even heading towards him. The Pole could have turned out to the left but Nketiah takes one step that way, forcing him all the way back to goal.

And – watch it back – when he goes after McCarthy, Eddie takes one step to his right, forcing the ball the other way, before intercepting the pass. It wasn’t just anticipation from our young striker but intent; he created the opportunity to nick the ball with some really intelligent pressing and great use of little steps to force the ball into more uncomfortable areas. There was a lot more to it than effort and luck.

From one academy player to another, it would be remiss of me to finish this without looking at Saka more closely. He played much more like and orthodox wing-back again at St Mary’s, albeit in a back five rather than a back four, but his performance at Brighton last Saturday was just superb. Lining up in midfield, he burst outside Aubameyang over and over again, creating a sort of 4-4-2 as Auba moved inside to join Alexandre Lacazette and Saka played as a winger from a central position. The role and the spaces it put him in was reminiscent of Angel Di Maria (with Ronaldo in Aubameyang’s place) and his superb performances for Real Madrid in 2014/15 or even the way Manchester City often use Kevin de Bruyne.

Saka is already a spectacularly well-rounded player and can play in pretty much any position on the pitch. Let’s hope we keep him, because his talent, application, and versatility will only give Arteta the chance to try more interesting things.

Especially if we’re going to cater our approach according to the opposition’s strengths and weaknesses.

Juventus made a winning start to their Champions League campaign last night against Dynamo Kyiv.The Bianconeri went into the game after an underwhelming 1-1...
Read more

The beautiful game | Arseblog … an...

Football … the beautiful game – at every level. The sound of a wet boot smacking a leather ball. Sliding tackles, caked mud. The surprisingly...
Read more

Liverpool add 12 more youngsters to their...

Liverpool have submitted ‘List B’ of their Champions League squad ahead of their clash with Ajax, with 12 youngsters added to the group for...
Read more

Juventus made a winning start to their Champions League campaign last night against Dynamo Kyiv.The Bianconeri went into the game after an underwhelming 1-1...
Read more

Real Madrid - La Liga Have to get back to winning waysReal Madrid were treated to a downpour on Tuesday as they went through their...
Read more

Football … the beautiful game – at every level. The sound of a wet boot smacking a leather ball. Sliding tackles, caked mud. The surprisingly...
Read more

Liverpool have submitted ‘List B’ of their Champions League squad ahead of their clash with Ajax, with 12 youngsters added to the group for...
Read more