Supporters have been left with a bad taste as Kidderminster Harriers axe an incredibly big yet simple part of matchday experience.

Ok, we may be over dramatising it a tad, however the latest decision issued by the National League North outfit hasn’t gone down well at all.

Now when we go to the football, we all love something to munch on, whether that’s a burger, pie or even some soup, and fans often come from afar to try out the popular servings at Aggborough Stadium.

However, from the 2021/22 season onwards, it’s all set to change, and with fans coming back, it’s a massive blow to both the fanbase and eventually the club when they realise it.

It is with heavy heart that the club announces the end of its longstanding commercial partnership with Quality Fayre Caterers.

It is with heavy heart that the club announces the end of its longstanding commercial partnership with Quality Fayre Caterers, operated by the late Brian Murdoch and his wife Joan, and more recently his daughter, Helen.

The partnership, which has lasted for over 50 years, helped place the Harriers on the map, with their legendary pies regularly topping the charts in the newspaper league polls when the club were fortunate to have a place in the Football League.

Our decision is a result of being unable to agree terms for the forthcoming 2021/22 season. The club understood that terms had been agreed verbally in May, but when the contract was drawn up for signing, it was apparent that there were unresolved issues that could not be agreed upon.

This came to light at too late a stage to arrange an alternate food provision for our home fixture against Cheltenham, with the club only being able to source a single hot food van for the home game against Walsall.

We appreciate fans have been frustrated by the lack of hot food and drink at Aggborough for our first two home fixtures, we simply did not have time to organise a satisfactory complete short-term solution. We had hoped that a deal could still be agreed with the Murdoch family, but earlier this week we received confirmation that they would not be seeking to continue the partnership with the club.

We would like to thank the Murdoch family for the support they have given the club over the years and wish them every success with their future ventures. The support they have provided the club will never be forgotten and hopefully they can still be a part of our future.

The 2021/22 season will therefore see a new food provider at Aggborough, who we hope will receive the full support of our loyal fans. We ask fans to bear with us during this period of transition. It is our aim to be able to provide hot/cold food and drinks to fans in all areas of the ground for the Manchester United XI fixture and beyond, although it may not be possible for us to operate from the kiosks fully for a few of weeks.

As mentioned, supporters were left with a bad taste as Kidderminster axe a big part of matchday experience…

@WCFCtoonbranch: This is own goal territory. A big part of the Aggborough match day experience being lost here. I know from personal experience that you guys are not good at handling disputes but read the room.

@kiddyguest: I rarely eat at the ground. But the food tradition of the soup and pies is as much part of the Harriers match day experience as missing penalties. Will be missed by home and away fans. Thank you to the Murdochs for all you have done over the last 50 years and to Brian especially.

@davidharrison92: Seriously hope this gets reconsidered. Harriers have always been a fan-first club. The match day offering set them aside as something special… there were days when the pie would outclass the football.

@jansoldman: The ravens have left the tower.

@RussWWFC: A heavy heart and an empty stomach

@lewisegan: Back here to read the comments after a few hours. Not one single positive comment as expected. Making simple decisions like this will slowly turn the fans away from the board and the club. Hope its not to late to make a reconsideration

@SteveLamb70: Can’t see decisions like this will enticing fans back into Aggborough, as we so desperately need. Tearing up tradition in this manner isn’t smart logically or commercially. Surely someone can find a resolution or have a re-think on this?!

@nickmhatton: Very sad, a huge part of the reason why so many visiting fans come to games and will have generated plenty of income because of it. Lets see what comes in, but I hope, as the club do it seems, the partnership can return.

@Frenchy1989: Sold our soul, I won’t be buying food from Aggborough again.

@bearnotpear2: I’m not privy to the commercial disagreement however there is no argument that it feels like death by a thousand cuts at the club. At a time when we should be primed to encourage people back to the ground it feels like there is an ever increasing flow of reasons not to attend.

@jord96cufc: What a shame this is for your club, when we were non league we would litrally make this an away day for the food

@2_youngy: You only need to see the response not just from kiddy fans but fans all over the country. The food was the only thing keeping people going in the past 5-8 years. You need to rethink this “issue” or have some serious replacement lined up. @khfcofficial

@Deankid: Thanks to the Murdoch family for the last number of years…. another poor decision by the club. It’s just one after another..a non league football club needs a USP…not overpriced tickets, rubbish kit and identikit experience

@simonc1607: Not 1 single positive comment in reply to this from the fans says it all. 1 step forwards, 2 steps back every time.

@g_sapper: What vital revenue stream are you going to destroy next? We dont have a team good enough to counter the culling of vital commercial activities and fan experience. We will go bust if this carrys on.

@khfckarl: Where to start? Here goes. I’m a supporter since 1976 as a young boy. It’s *my* club. I’ve been lucky enough to see the club rise from the desperate 70’s to the football league. I was there every step of the way. It shaped my life… seriously! The last 15 yrs have seen a dramatic decline in the club’s fortunes. We all know about this. The last 5 years have been painful. COVID has not helped! The club is crumbling before my eyes. Commercial decisions have to be made I understand. But who is making them? People who understand the history/legacy or purely commercial? Many now can’t be bothered. I have corporate sponsorship but no ST? Is the club bothered. Perhaps the 1st part is all they are bothered about. BTW I donated ST.

@BergerBrakes: Ah well one of the main reasons for away fans to make the trip to Kiddy has gone!

@Dauntless1980: It appears that “out with the old” applies to pies as well as people

@AlexWithers14: Seriously losing our soul, no red and white halves, no cash turnstiles… no famous pies. 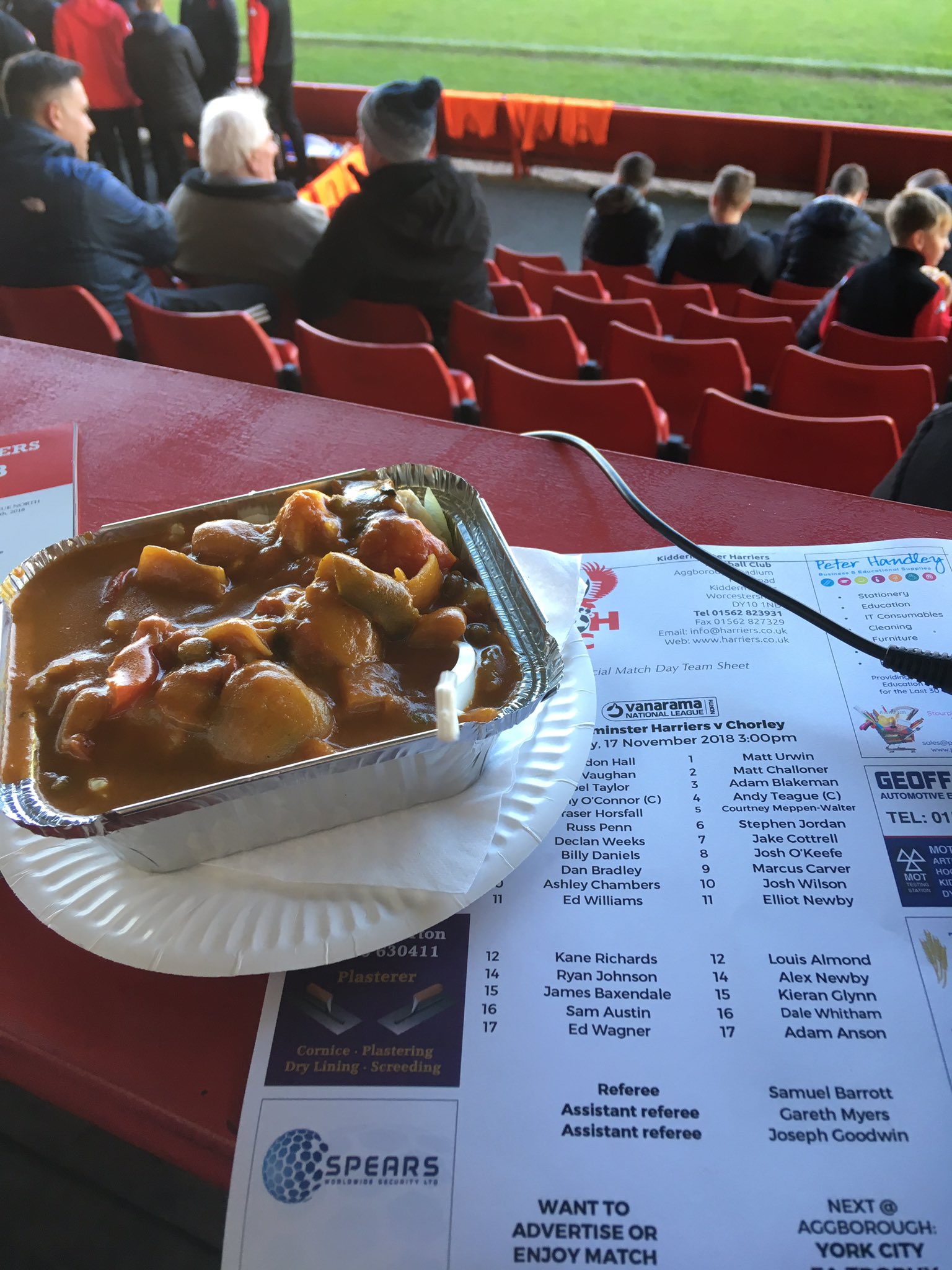 @BethyMay_: I actually can’t believe this! Why would any fan come to kiddy away now? Least be honest they come for the pies 😏

@PaulBayliss9: Away supporters won’t come in as many numbers, no more awards, recognition, not to mention publicity regarding #priceoffootball. Where is the soul of the club heading….. Is it to do with cost of rent? Think we should have a whip round to get them back ifso #Murdochs #CottagePie

@Watten86: This is the biggest loss to the footballing community. Those pies were absolutely incredible, and always made those winter nights worth looking forward to. A very disappointed Cheltenham Fan. Kiddi fans, I am sorry for your loss.

@Chumbageni: Round trip of 40 miles to Aggborough, the food a significant part of the experience. Re- evaluation needed.

@jansoldman: As a 63 year old I’m picking my games. Massive increase in prices for over 60s.

@MaximusOwen: As an away fan Aggborough was the only football ground I’ve ever had food at. Every other ground offers disgusting slop I wouldn’t even give to my dog, such a shame you’ll now be offering the same.

@Wesley_James: Heavy heart??? Who’s going to buy that?! There goes the best pie award, something we win every year btw. Just want to be a winner.

@BalmforthAndy: A big reason of why I’d pop down for a game if Villa or Halesowen weren’t playing. Will cross you off the list now. Poor decision imo.

@jabarnett4: This is not going to go down well…! Was really looking forward to our famous pies again 😞 I mean I never rated the rest of their food, but the pies & soup, famous for a reason!! End of an era

Juventus in talks with Bernardeschi over new...

Juventus has started talks with Federico Bernardeschi over a new contract.The Euro 2020 winner has spent the last two seasons struggling for relevance at...
Read more

There was a reunion, a rabona save and predictable Naby Keita injury as Liverpool, booked their place in the fourth round of the League...
Read more