A new report reveals which clubs had the most arrests and banning orders for the 2021/22 season as football disorder reaches an 8-year high.

Arrests and reported incidents of disorder at football matches in England and Wales last season were at their highest level for eight years with 2,198 football-related arrests made, the highest number since the 2013-14 season, according to Home Office figures.

The campaign saw the return of capacity crowds after a year of Covid restrictions, and last season’s disorder included players being approached after pitch invasions.

The most talked about incidents saw a fan was jailed after running on to a pitch and headbutting Sheffield United captain Billy Sharp at the end of Nottingham Forest’s playoff match against the Blades.

We also saw Manchester City fan run onto the pitch and taunt Aston Villa keeper Robin Olsen on the final day of the season at Etihad Stadium receive a four-year football banning order.

It would seem trouble has rather calmed down for the 2022/23 season, especially with tougher punishments set out for culprits planning on causing trouble or invading the pitch.

There were an additional 140 Schedule 1 football-related arrests by British Transport Police (BTP), and 314 Other (non-Schedule 1) arrests (excluding BTP) in the 2021 to 2022 football season. In contrast to the arrests shown in Figure 1, BTP and Other arrests both decreased by 10% compared with the 2018 to 2019 season.

The most reported types of incidents were pyrotechnics (729 matches where incidents were reported), throwing missiles (561) and public order or anti-social behaviour incidents involving youth supporters (444).

As at 28 July 2022, there were 1,308 football banning orders in force. This compares with 1,359 as at 1 August 2021 (-4%) and 1,771 as at 1 August 2019 (-26%) (prior to restrictions relating to the pandemic). Figures relating to football banning orders in force will have been affected by changes in the way spectators were able to view and attend matches during the COVID-19 pandemic, and the impacts are likely to remain for the current season due to the duration of a banning order being at least 3 years.

During the 2021 to 2022 football season, there were 2,198 football-related arrests in connection with regulated international and domestic football matches involving English and Welsh clubs and the national teams (excluding BTP; see the BTP section for football-related arrests by BTP). This is the highest number of arrests made in a season since the 2013 to 2014 season, when 2,273 arrests were made, and is a 59% increase from 1,381 in the 2018 to 2019 football season. 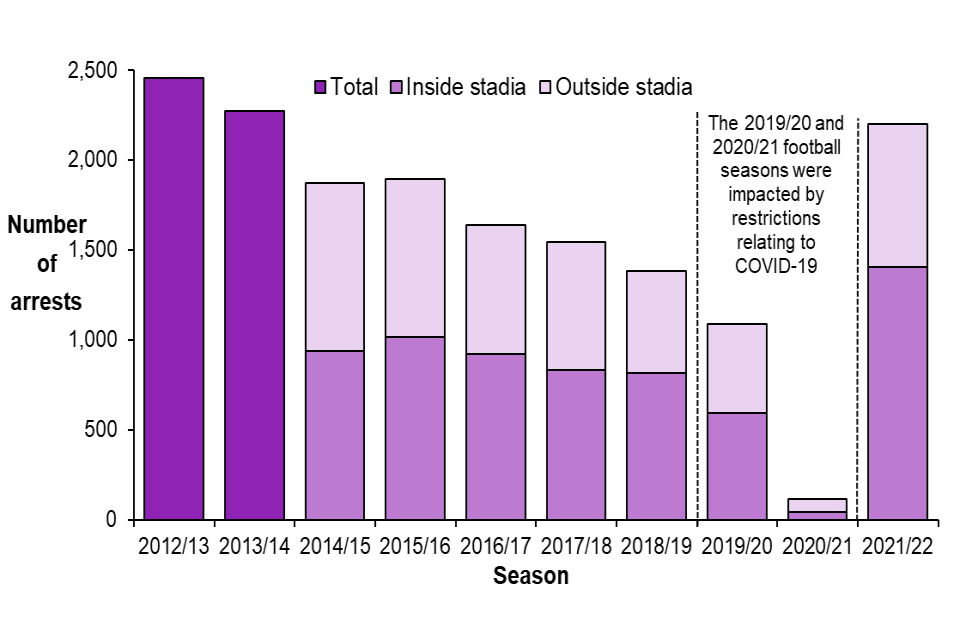 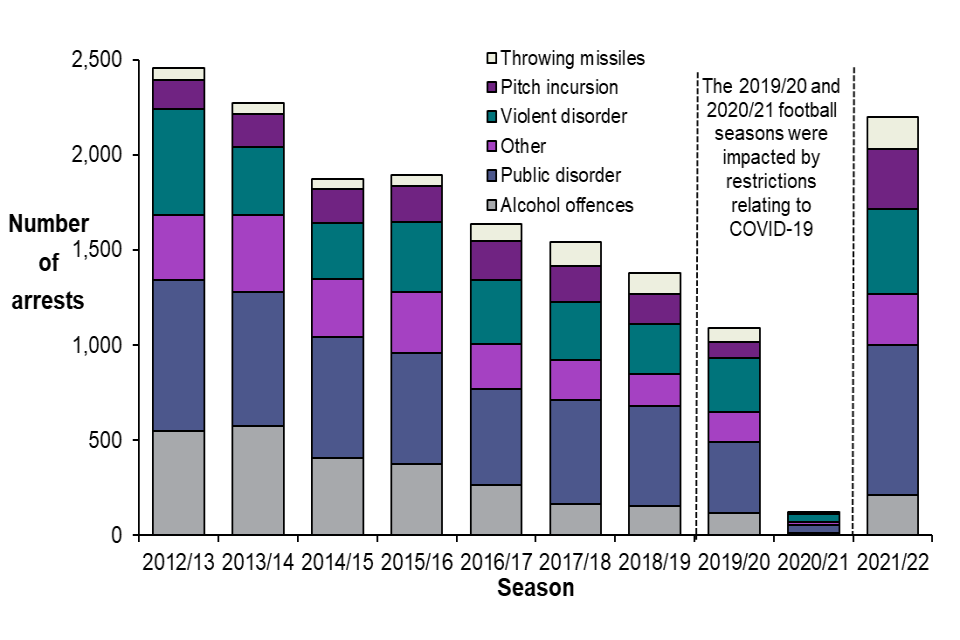 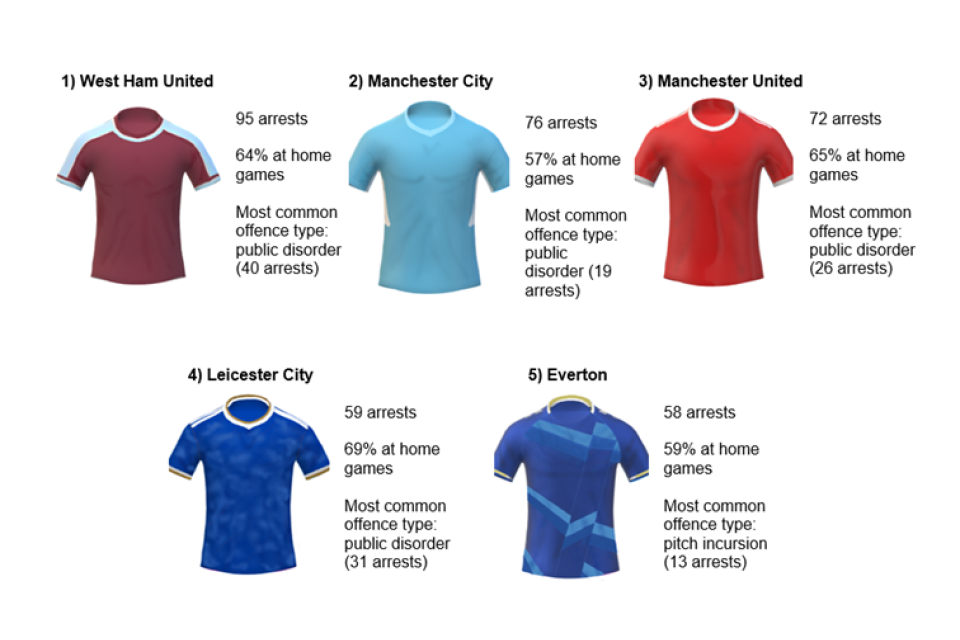 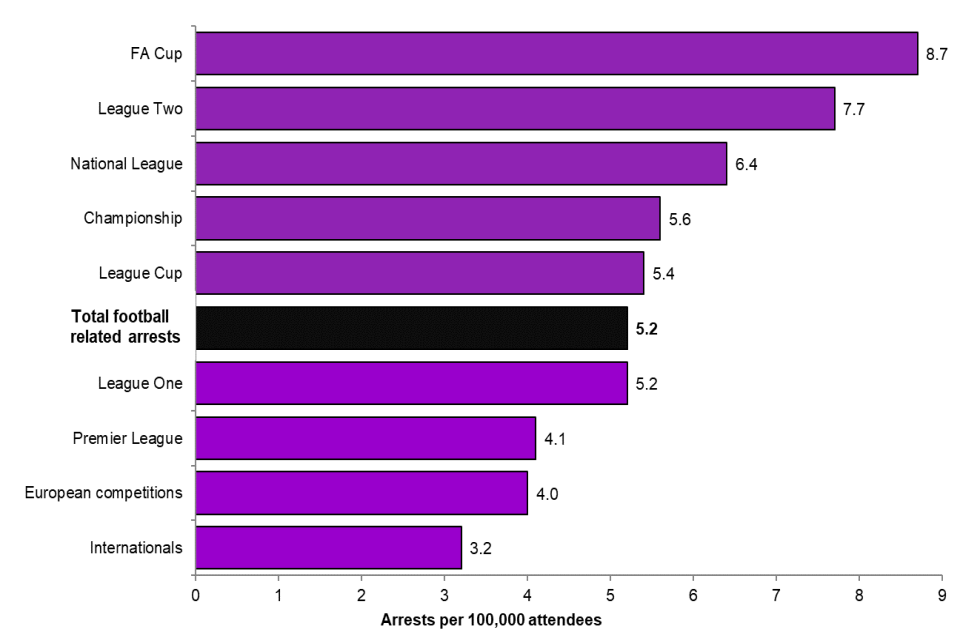 It follows recent comments by England internationals Jordan Henderson and Eric Dier, who both say there is an issue with fan behaviour at football.

Tottenham’s Dier says he feels “too uncomfortable” for his family to attend away matches, while Liverpool captain Henderson says his family’s experiences could “put them off going to future games”.

“For me it is a serious problem. I had some family and friends at the Chelsea away game with Tottenham and they had problems.

“I wanted to emphasise it was both sets of fans – I am not saying it is Chelsea fans or Tottenham fans, it is football fans in general.”

Henderson added: “My family and friends have had a couple of experiences over the last couple of years, which has really shocked them and probably put them off going to future games.

“When you see scenes like you have in the Euros final, in the Champions League final, then they don’t really want to go and put themselves in that situation again.

“My wife and kids had to try and get in a side door (at Wembley) which they wouldn’t let them in at the beginning. And they were trapped.”

Football Policing Lead chief constable Mark Roberts says disorder is a “problem” that has not gone away from any level of the professional football pyramid.

“Following constructive talks with the Premier League, English Football League and Football Association we are keen to support our partners in delivering their proposals – which include the introduction of stadium bans for people who enter the pitch, as well as those who use pyrotechnics,” said Roberts.

“We are also pleased that the Government is adding Class A drugs offences to the banning order legislation. This will provide police with another option to tackle criminal and anti-social behaviour by those who are under the influence of drugs.”

The latest issue of World Soccer is now available to buy online and in shops. With just one month to go until Qatar 2022 kicks off, and in the final...
Read more

Manchester United have been given a boost in their pursuit of Atletico Madrid goalkeeper Jan Oblak, with the La Liga club keeping tabs on...
Read more

Former President, John Dramani Mahama is optimistic that Ghana will beat Nicaragua in the friendly match scheduled to be played this evening. The leading...
Read more

The latest issue of World Soccer is now available to buy online and in shops. With just one month to go until Qatar 2022 kicks off, and in the final...
Read more

Marcus Thuram missed Borussia Mönchengladbach training on Tuesday with a calf problem and it’s questionable as to whether the Frenchman will be fit enough...
Read more

Manchester United have been given a boost in their pursuit of Atletico Madrid goalkeeper Jan Oblak, with the La Liga club keeping tabs on...
Read more

Gareth Southgate has defended his decision to select Harry Maguire for England’s Nations League games with Italy and Germany. Maguire was included in the England...
Read more