Premier League clubs with the biggest debts have been ranked from least to most amid reports concerning Tottenham on Tuesday.

Spurs have announced pre-tax losses of £80.2million for the financial year ending June 2021, with total debts increasing from £605m to £706m.

The club said the last two financial years had been “significantly affected by the Covid-19 pandemic” and have resulted in pre-tax losses of nearly £150m for period of two years.

Due to matches being played behind closed doors during the pandemic, match receipts were down to £1.9m compared to £94.5m in 2020.

Chairman Daniel Levy said in a statement: “The financial results published for our year ended 30 June, 2021, reflect the challenging period of the pandemic and the incredibly damaging timing of COVID-19 coinciding, as it did, with the opening of our stadium in April, 2019.

“With no less than three lockdowns our operations were severely disrupted, albeit this was secondary to the impact everyone felt in their personal and family lives.”

Levy said Tottenham’s “building blocks for the future” were “firmly in place” following completion of their Tottenham Hotspur Stadium, a new training centre and new player accommodation, The Lodge.

“Having delivered our training centre, The Lodge and stadium we shall not stand still, we shall continue to innovate and ensure the most exceptional player, fan and visitor experiences,” Levy said. 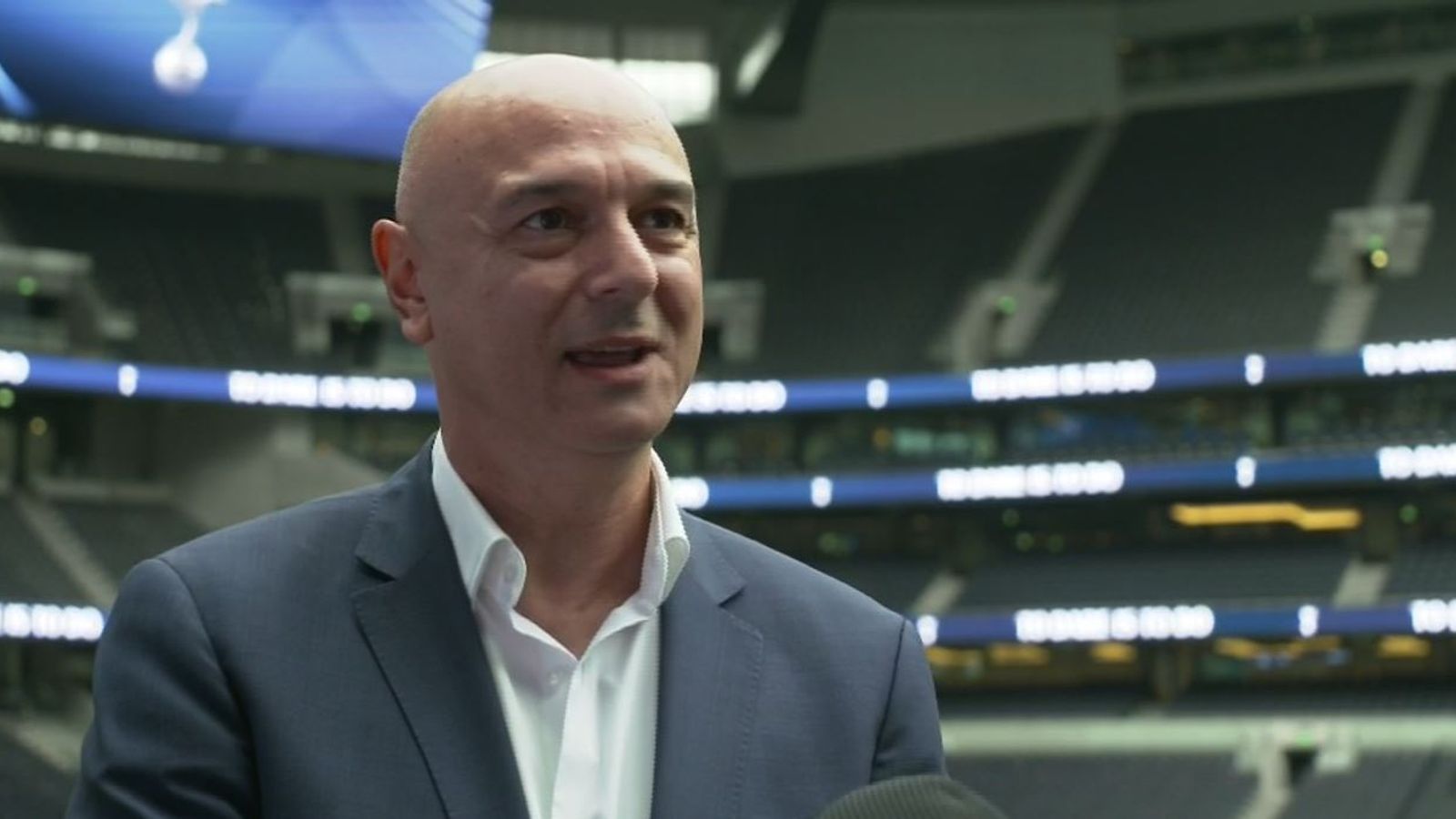 “Going forward, therefore, our strategy is clear – to drive and generate revenues to invest in all of our football activities.”

Tottenham appointed Fabio Paratici as managing director of football in June and Antonio Conte was installed as their manager earlier this month following the sacking of Nuno Espirito Santo.

Levy said: “The appointments of Fabio and Antonio are a clear demonstration of our intent and ambition.

“Since opening the stadium in April, 2019, we have spent almost £400m on players. Player spending is no guarantee of success, and our focus must be on improved recruitment, coaching, fitness and a competitive mindset.

“We shall also look to continue the well-established path for youngsters from our academy to our first team. I know that Antonio’s approach is if a player is good enough, he will play, regardless of status or age.

“We have come a long way and we have so much further to go. We remain relentlessly ambitious and are determined to deliver honours and make our supporters proud.”

With this in mind, we take a look at the Premier League clubs with the biggest debts from smallest to biggest according to 1sports1, take a look below…

The impact of the COVID pandemic had a major effect on the financial results.

However, thanks to the unwavering support of their Owners, the operating loss and all capital investment has been funded by shareholder equity. Aston Villa remains debt-free.

The magpies had debt over £111m owed to previous owner Mike Ashley, however, with the takeover of the club by Saudi Public Investment Fund all done, the club is now debt free. Now wonder the fanbase are overjoyed.

The £300m deal’s funded by the country’s Public Investment Fund, which is seen as separate from the state, and this allows the bid to go through.

They are backed by the crown prince of Saudi Arabia, Mohammad Bin Salman, and now they can actually spend decent sums of cash on future transfer windows while also being set to make massive investments in the years to come.

Norwich have issued their annual accounts, and it shows the “significant” impact the pandemic had on them.

Leeds United lost £62m during the 2019-20 season amid the financial impact of the pandemic.

Marcelo Bielsa is dubbed a hero for guiding his side to promotion to the Premier League, finishing top of the Championship as they returned to the top flight for the first time in 16 years.

Turnover at Elland Road did leap to £54m, from £48m the year prior.

This was projected to hit £56million before the impact of the pandemic.

He said he was able to bid his money on the team because he has been watching Brentford play since he was 11.

Benham adds that said he trusted the team completely and would still believe in them even if they cost him his money.

The South London club Crystal Palace announced a pre-tax loss of £58 million for 2019-20.

The club has zero net debt at the end of July 2020 with a cash position of £ 58.4 million, largely attributable to the borrowing.

The £170m US takeover has used the club’s own money and loaded it with debt.

It is understood ALK have so far paid £102million towards the Burnley takeover, with around £60million raised through a loan provided by Michael Dell’s MSD UK Holdings.

The club is now approximately £90m worse off, with interest to pay.

The 2019/20 financial results covered a season that the club described as “unique and challenging”, as it ended in relegation after they finished 19th in the Premier League.

The following season was affected by covid pandemic which contributed to further losses.

The club is currently back in the Premier League and will hope to stay in the division.

Commercial cash also dropped by 5% to £ 34 million, hampered by a warehouse shut-down.

Unlike some clubs that reported a fall in matchday income, Wolves saw this revenue stream rise by 10% to £12.7 million.

Given the Covid scenario in the last couple of season, the gross debt of the club increased to £152m.

Arsenal, once the standard-bearers for conservatism and prudence in football, posted their second successive annual loss in 2019-20, but there could be worse to follow.

Covid aside – the club revealed £ 35 million of losses were attributable to the pandemic – Arsenal’s absence from the UEFA Champions League is costing the club financially and reputationally.

Arsenal’s net debt has increased substantially, rising from £ 42 million in 2019 to £108 million.

This is largely due to a reduction in cash at bank and in hand to £ 110 million from £167 million. Gross debt is still over £200 million.

The directors have reviewed the club’s cash flow forecasts and they revealed that the company is reliant on continued funding from external banks as well as King Power International.

Leicester have entered into two five-year loan facilities for a total of £ 30 million to finance the working capital requirements of the club and have increased and extended a £45 million facility with Macquarie Bank to January 2022.

FSG and Fenway Sports have the Anfield club ran on a tight budget. Liverpool’s owners have taken out loans to develop Anfield in recent years.

A total of £197m was drawn down from the credit facility, although it is understood that a significant chunk of that loan has been paid back already after football restarted and media revenues started to trickle in once more, as well as other monies that have been brought into the business in past months.

The £197m figure adds on to the £71m that Liverpool owe to owners Fenway Sports Group, paying off a further £8m of their £110m loan to aid the redevelopment of the Main Stand at Anfield.

That takes the gross debt at the club to £268m.

Brighton & Hove Albion are surprisingly sixth on the list, although the £306m worth of debt is actually owed to their owner Tony Bloom who is a lifelong fan of the club.

Bloom invested £111m into squads in a bid to try and get Brighton promoted to the Premier League.

He has also overseen the Seagulls move from the Withdean Stadium to the Amex Stadium, which cost Brighton over £100m.

They have proposed a new share issue to the majority shareholder, Farhad Moshiri, worth £250m to cover the club’s continued losses.

After years of Manchester City fans enjoying their club being debt-free, the Blues have gone into the red.

More than a few City fans were a little bewildered when the Blues – or rather their parent City Football Group (CFG) took out a $650million loan (£473m).

That money is said to be earmarked to keep growing the CFG, by financing a new stadium for New York City, and other projects.

The impact of Covid on matchday revenue at all the CFG clubs has been felt, and to keep on investing in the CFG growth, the club had to look to external sources – hence the loan.

Although United made a net loss of £92.2m, that was understood to be largely down to the accounting impact of a £66.6m non-cash tax charge.

Spurs are not just one of England’s top clubs, they have moved into the top dozen in Europe.

What’s more, they have leapfrogged Arsenal, their North London rivals, built a terrific new stadium and have reached the Champions League final. The past decade has been eventful for the Spurs, but they still haven’t won anything since 2008.

Tottenham’s gross debt had previously been as much as £831million a few months back, with £140million owed in transfer debt, £96million in tax debt, £9million in trade creditors and £102million in other creditors equalling a total of £1.177bn.

Chelsea have a unique ownership structure, wherein the club’s debt (about £1.3 billion owed to Abramovich) has been converted to debt held in a holding company, Fordstam Limited.

While on one hand, the debt exposure towards related parties is significant, on the other, Chelsea have no interest-bearing financial debt owed to other parties, such as financial institutions.

This bit of financial hand-waving means that Chelsea, as a club, are essentially debt-free, though Abramovich could theoretically call in the full amount owed, which could lead to an interesting situation.

Though in practice would essentially mean he’s selling the club and the new buyer would have to fulfill that debt.

Chelsea earned a hard fought victory over Watford on Wednesday evening, as Hakim Ziyech’s late goal was enough to see off a...
Read more

What Marcel Brands said in row with...

In this article we take a look at what Marcel Brands said in a row with one angry Everton fan straight after the Liverpool...
Read more