It’s a battle of the outgoing champions and the newly-crowned title winners as Liverpool travel to meet Man City aiming to add another win to their record-breaking season.

The baton has been passed from blue to red, a battle which has defined the last two league campaigns has seen Jurgen Klopp‘s side come out on top – and now they can add further distance to their foes.

When Pep Guardiola’s side succumbed to defeat against Chelsea last Thursday it sent a wave of euphoria to all those of Liverpool persuasion, with the wait for a league title officially over.

The result ensured the Reds’ points tally of 86 was unassailable, with the gap between themselves and City stretching back out to 23 points at the 31-game mark.

And now a chance to extend the gulf to 26 points awaits Klopp’s men as they aim to break the record held by City for points accumulated in one season (100) with seven games remaining.

Liverpool will be welcomed to the Etihad with a guard of honour before the battle ensues, one neither side will be eager to walk away from without adding to the win column.

A league double over City is on the line, can the Reds add that to their set of achievements for the season before the night is out?

Klopp was dealt a blow with Joel Matip now unavailable for the remainder of the season due to a foot injury sustained during the Merseyside derby.

The centre-back revealed on Tuesday that he now only has his sights set on a return next season, with his premature end to the campaign capping his total appearances at 13.

It’s yet another injury setback for the 28-year-old, who missed 20 games earlier this season with a knee injury, which leaves Virgil van Dijk, Joe Gomez and Dejan Lovren as the remaining senior options in the heart of defence.

It could pave the way for Ki-Jana Hoever to be added into the fold as the season moves into its final stages with Klopp having been vocal of his desire to promote from within.

James Milner, meanwhile, returned to training this week after sustaining a hamstring strain against Everton, but would be an unlikely inclusion against his former team.

And there was a notable return to training for Xherdan Shaqiri after being a largely absent figure during Liverpool’s come back to action.

For Man City, Sergio Aguero is currently sidelined with a knee injury, Fernandinho is suspended following a red card against Chelsea and Leroy Sane is on the cusp of completing a move to Bayern Munich.

Last 5 Away to Man City (All Competitions) 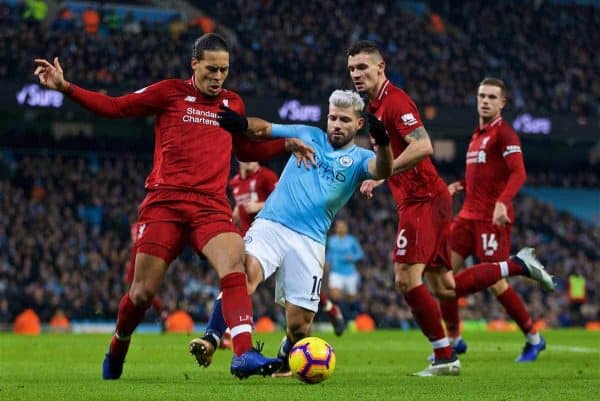 Manchester City manager Pep Guardiola has lost nine matches in all competitions against Jurgen Klopp – meaning the boss has inflicted more defeats on the Spaniard than any other manager.

They have met on 18 occasions, 10 of which have come in their battle in England, of which Liverpool have emerged as victors on five of those occasions, with City winning just two.

The battles between the two sides have only once ended in a scoreless draw, October 2018, while only four clean sheets have been secured between the two teams, with the Reds securing three to City’s two.

Speaking in his pre-match press conference, Klopp was expecting another “intense” battle aginst City and more goals – with the fixture having returned 30 in the last 10 meetings: 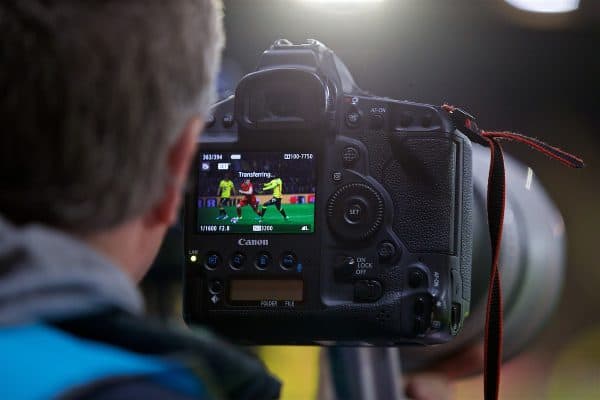 Man City vs. Liverpool will be shown live in the UK on Sky Sports Main Event and Sky Sports Premier League, with coverage starting at 8pm (BST) ahead of the 8.15pm kickoff.

Chris Williams has you covered on This Is Anfield’s matchday liveblog, keeping you entertained and up to date with all the action, starting from 7.30pm (BST).

18 months; to supporters of most clubs, that's a very acceptable period of time to wait between lifting trophies. For Real Madrid, however, 18...
Read more