It was another victory added to the tally on Wednesday and while there was little riding on the game itself, it created a number of discussion points for the Reds faithful.

Jurgen Klopp‘s side show no signs of slowing down in Europe’s premier competition, with Porto their lastest conquest for the second time this season.

Thiago‘s wondergoal and Mohamed Salah‘s 17th-goal of the season proved the difference but the match presented talking points beyond their strikes and influence.

And here, This Is Anfield’s Joanna Durkan (@JoannaDurkan_), who was at Anfield, and Henry Jackson (@HenryJackson87) discuss Tyler Morton, the left-back battle and our standing in the group of death.

Expectations will rightly be managed, but early Morton thoughts…

HENRY: I think it’s important to remember that it was a low-pressure game with little riding on it for Liverpool, so it would be wrong to go overboard about Morton.

That being said, there was a maturity about the way he performed on such a big occasion for him personally, with so much poise shown in the middle of the park.

Intelligence is arguably the key attribute in any footballer and Morton looks to have that in abundance.

He showed his defensive instincts a few times and kept things simple but effective on the ball – many other past Reds youngsters would’ve looked more out of place.

It is too early to tell how good Morton will be, but his reputation at the club speaks volumes and he will almost certainly get more chances this season.

JOANNA: Definitely with Henry on the need to keep level headed as it’s still very much early doors, but the signs bode well for Morton’s future.

I was particularly impressed with his level of communication and constant gesturing against Porto in the No. 6 role that he admitted he hasn’t had vast experience in.

It may sound simple and what you’d expect but in this Liverpool team, it’s easy to be overawed and go into your shell as a 19-year-old, but there were zero signs of that.

To help set in motion Salah’s goal should not go unsaid, it is a nod to that intelligence that Henry mentioned. He’s got the brain and the physique will catch up over time.

We’ve got a left-back fight on our hands, who should start vs. Southampton? 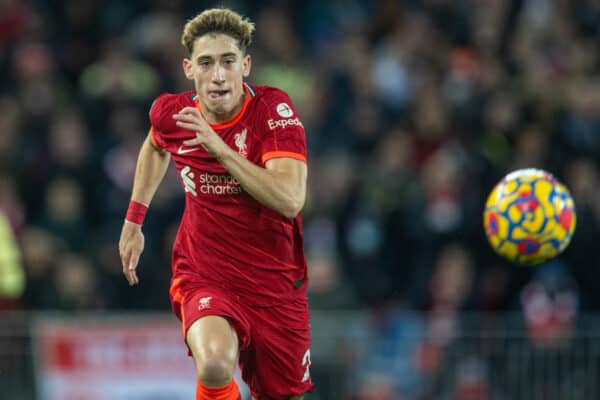 I thought Kostas Tsimikas had a disappointing game against Porto, while Andy Robertson looked hungry when he came on, immediately inspiring a Reds attack.

I think I would still just go for Tsimikas against Southampton due to Robertson still looking for full fitness, but I would be perfectly happy with either.

JOANNA: How good is it that this is even a consideration? We went so long without one reliable left-back and now we can call upon two! We’re going to get spoilt!

I’ve been really impressed with Tsimikas so far this season and his range of passing and it’s been pretty obvious that Robbo hasn’t quite been at his best.

It’s a nice headache for Klopp to have and I won’t be disappointed either way on Saturday. I know that’s sitting on the fence, sorry!

HENRY: What I would say is that I would definitely start Robbo in the derby next Wednesday – the Goodison Park atmosphere will be fierce and his character, leadership and quality will all be more suited than Tsimikas.

My gut feeling is that Klopp will go with the Greek this weekend, though.

JOANNA: I’m on the other side of the gut feeling to you there, Henry. I think Robbo will get the nod after his 30 minutes on Wednesday.

It would mean he’d have to back it up for the derby, as you say, he’s a certain starter in that one and I just sense Tsimikas might then be saved for Wolves and/or AC Milan.

And Liverpool are 10 points clear in the group of death…

JOANNA: It’s ridiculous. Where’s the drama we’ve come to know and have a love-hate relationship with?

Liverpool hasn’t got to this stage without a few frights but they’ve not allowed those moments to derail the end result, and the style of football we’re currently playing is built for the European stage.

To also have a +10 goal difference while Porto, Milan and Atletico are all in the negatives also speaks volumes of the dominance on show in games where Klopp has looked to rotate.

HENRY: It’s a fantastic effort. I was one of those annoying pessimistic Liverpool fans when the draw was made, particularly as Atletico have been our kryptonite in the past.

The Reds have made mincemeat of their group, however, and it only further highlights what a special team they are. One of the best in Europe for the last 20 years, in my opinion.

Barring the odd sticky spell at home to Milan and away to Atletico, it has all been done in such a low-key fashion too.

We’re used to drama following Liverpool everywhere they go in this competition, whether it be in the group stages or knockout rounds, but this has all been so serene.

The Reds are primed to win the competition this season, and while Man City and Chelsea look like extremely strong contenders as well – anything can happen once the quarter-finals arrive – you’d be a bold person to bet against Klopp’s men.

Two Champions League titles in three years would only further enhance the legend of this side.

Liverpool players and fans are basking in the glory of another win, another record or two and another knockout stage in Europe on the...
Read more

How do you find working for the club as supporter liaison officer? What’s the relationship with the fans like? “There’s actually a big football fan...
Read more