I’ve had a weird week of sleep. You know those nights when you’re restless, when you think you’re awake more than you are, but you know you must be asleep because you’re dreaming about bizarre things, but at the same time you feel like you’re awake? And then your German Shepherd wants to go out at 2.37am because she ate something yesterday which didn’t agree with her and she’s a bit of a burny bum-hole? So you wait for her to finish her business, and you go back to bed and you’re AWAKE awake with a line of a song in repeating around your head (‘Hey, kids, where are you? Nobody tells you what to do, baby’ – from REM’s Drive) and you think you’ll never get to sleep again but then your alarm goes off and somehow it’s morning.

That. But all week in various scenarios/songs. Lana didn’t have a scorched bottom every night, just last night, but overall I’m not feeling particularly well-rested today. I just need about 48 hours continuous sleep, perhaps some kind of Twilight Sleep, placed there by a friendly doctor with access to medical grade sleep juice (morphine). A man can dream. I bet I’d dream after a goblet of Sleepy M.

Before I went to bed last night, I watched some of El Gran Derbi between Sevilla and Real Betis. Not out of particular interest in either side, but because I was curious to see what the TV coverage would be like. Last week, La Liga announced broadcast innovations ‘which will allow matches to be seen in an attractive way that closely resembles how they looked and sounded before the competition was postponed.’

Those included crowd noise, as you’d expect, but they have also brought in virtual fans, if you like, to make it look as if the stands are full. It’s strange, as if you’ve been sucked into a virtual world in which Pro Evolution Soccer 2 is reality. On a surface level, and if you squint/concentrate on the players on the pitch, it looks vaguely passable.

This is what it looked like on my TV:

And this is what it actually looked like in ‘real life’ at the exact same moment: 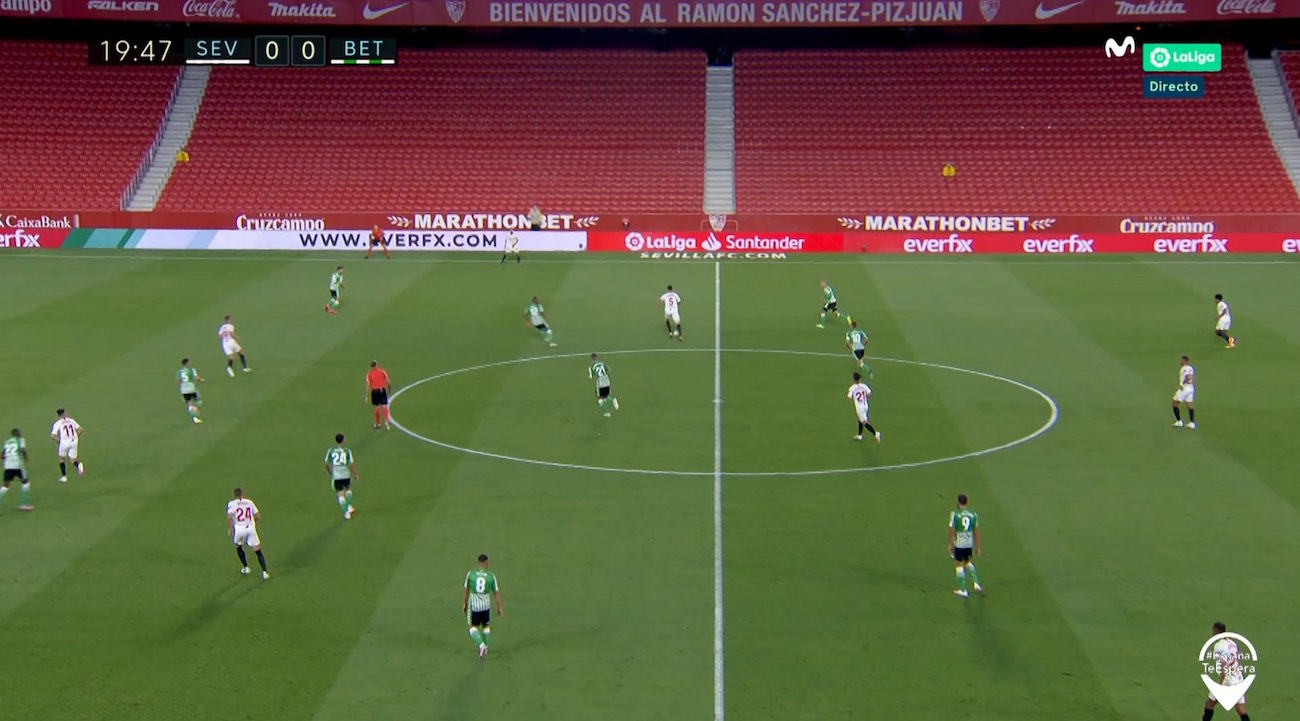 To be fair to it, the combination of low level crowd noise and these virtual ‘supporters’ created something of a comfortable viewing experience. The sort of ambience – if not atmosphere – you’d expect from a game of football on telly. The problem was that the PES fans would disappear at random moments, showing clearly the empty stands while the sound they were supposedly generating continued unabated. That was jarring, hammering home that what we were seeing was fake.

Maybe it’s something it’ll take to get used to, but it’s hard to ignore the reality of this football matrix. It’d be like being able to dodge bullets in slow motion one second, while the next you become aware than your life force is being milked from you like a human cow or whatever the shit the end of that film was.

On the half hour they stopped for a ‘cooling break’, something which is understandable in Spain in mid June when the league season is normally over, and on TV the stands displayed what are now known as ‘institutional messages’. At home we saw this: 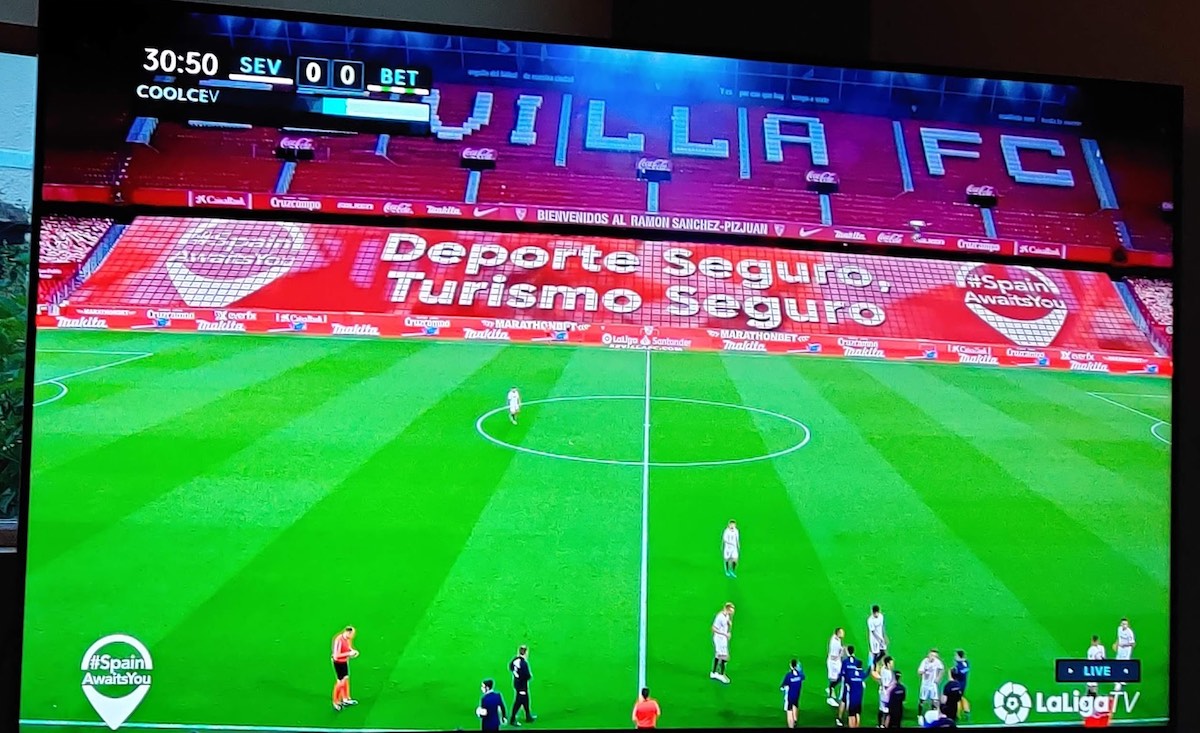 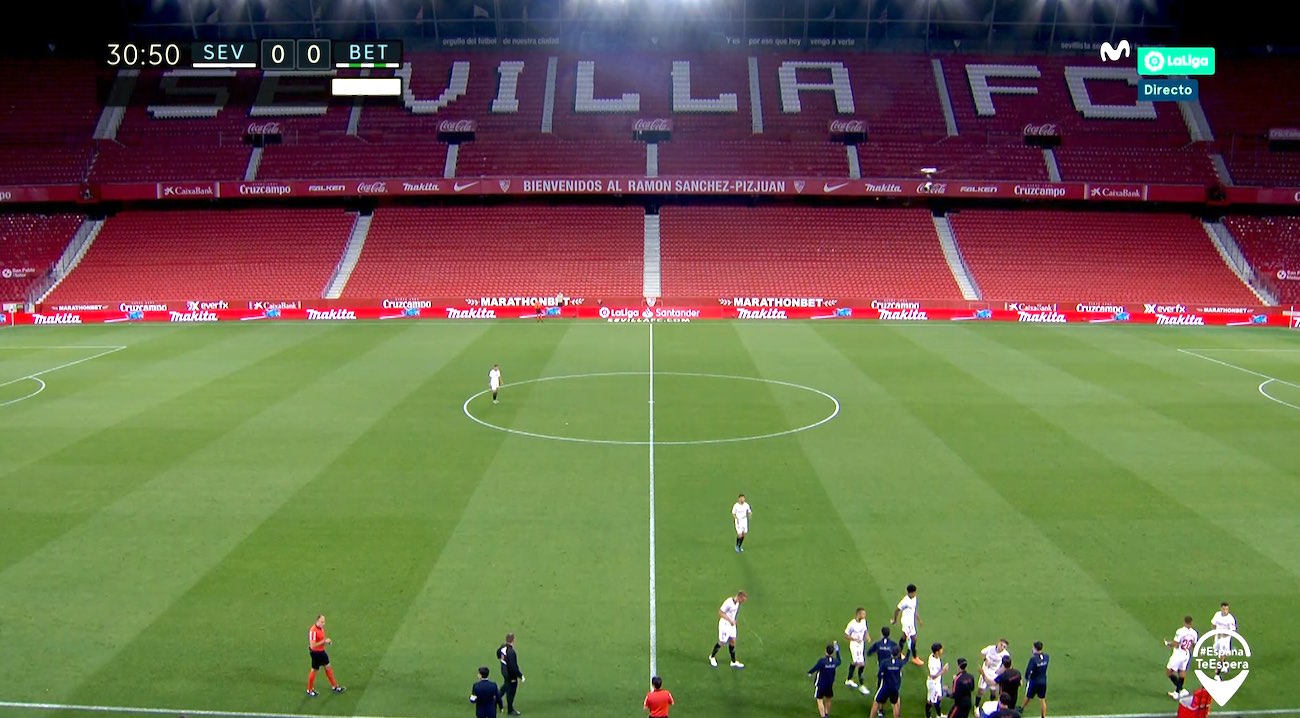 I have to say I found it all a bit weird. I understand why they feel they need to do this. Football is entertainment and a large part of that is the atmosphere created by the fans in the stadium. Without them, game is missing something fundamental, but so too is the world right now, and for me living through the reality of where we are is more important than being comforted by the illusion of something that’s not really there.

The other thing I found, and I only watched until half-time, was the crowd noise wasn’t particularly reactive. Moments where you’d expect the excitement to rise, as one of the teams attacked or got into the box, sounded more less the same as a couple of midfielders trading passes in the centre-circle. All in all, it wasn’t an experience I particularly liked. Under normal circumstances I would probably have stayed up and watched the second half (Sevilla won 2-0, btw). As it was, I didn’t feel at all captured by it.

This could be because I have no skin in the game. I didn’t care one way or the other who won, but I enjoy a good game of football and having been without it for so long I was surprisingly indifferent. I suppose this could also have been true if I’d been watching the empty stands and the sounds of shouts echoing around Estadio Ramón Sánchez Pizjuán, but if the virtual reality was supposed to draw me in, it didn’t really work.

For some extra reading this morning, Tim’s column touches on a similar theme regarding the lack of crowds when football gets going again in England. Have a read here.

Right, that’s your lot for this morning. On today’s Arsecast I chat with Musa and Ryan from Stadio Podcast about the return of the Premier League, what we can learn from the few weeks of football we’ve seen in the Bundesliga, the scrap for Europe and lots more. All the links you need to listen/subscribe are below. Have a good one folks.

Liverpool midfielder Fabinho has signed a new contract with the club.  It can be recalled that the...
Read more

They may have spectacularly fallen out of the title race, but Liverpool cannot be counted out of the conversation this season. A...
Read more

Bolton’s Antoni Sarcevic hits back at angry fans as he comes back with a strong message following an ‘incident’ which happened at the weekend. The...
Read more

Daniela Porcelli/Sports Press Photo Australia and the United States will play for the bronze medal at the Tokyo Olympics on Thursday (4 a.m. ET), and...
Read more

The 2021 Major League Soccer All-Star roster is in and headed by USMNT Gold Cup winners Matt Turner and Miles Robinson as well as...
Read more

Liverpool midfielder Fabinho has signed a new contract with the club.  It can be recalled that the...
Read more

Chelsea need a striker Chelsea’s search for a striker has been one of the worst kept secrets of the summer. Initially after Erling Haaland, they...
Read more

They may have spectacularly fallen out of the title race, but Liverpool cannot be counted out of the conversation this season. A...
Read more