Liverpool players continued to share their joy and gratitude to the fans as their Premier League triumph started to sink in.

It has been over 40 hours, since the time of writing, that Jurgen Klopp‘s side officially secured the Premier League title and his players are rightly still coming to terms with their new status as the champions of England.

Throughout the campaign, it has always been a case of one game at a time with talk of the invitable title off-limits, even when they moved to within two points against Palace in mid-week.

But now the team are free to sing the praises of their teammates, manager, coaching staff and the fans and after partying hard on Thursday night the Reds are still processing their triumph.

The skipper included as he took to Instagram after the initial high to send a message to the fans after an exhilarating “24 hours”.

He said: “Wow. What a 24 hours! Being able to celebrate together as a team last night is something we’ll all never forget. However, I wanted to send a message too to all of you, our amazing fans.

“It is a true privilege and an honour to represent and captain your great club. We know it’s been a long wait but to all of you Reds, this one is for you When the time is right, we can’t wait to celebrate with you all. Thank you for always believing in us.

“Now we must focus on the next seven games and finish the season as strongly as we can before we get to lift that trophy. To each and every Liverpool fan out there, You’ll Never Walk Alone.”

And it was more of a simple message from Alex Oxlade-Chamberlain who no doubt encapsulated how many are feeling by saying “It’s all mad”:

The former was not shy to admit he was still watching “Liverpool winning the league” on loop while Trent was the image of many as he summed up the occasion by simply stating “What a week”:

The club’s youngsters were thrilled to be involved in the celebrations both on the night the title was secured and the following morning as they showed off the gift the club gave each player to commemorate the occasion.

For the likes of Neco Williams, Jake Cain, Leighton Clarkson, Harvey Elliott and Paul Glatzel it was a taste of what could be to come as they continue to develop under the tutelage of Klopp:

The morning after the night before saw both Naby Keita and Gini Wijnaldum wish Reds around the world a “very good day,” one which Liverpool’s No. 5 sought to add a special touch to with his very own Instagram filter celebrating the title win:

It’s clear to see the Reds could not wipe the smile off their faces, as it should be, with Adrian testing out Gini’s filter and Adam Lallana enjoying a morning a cup of tea from a special mug: 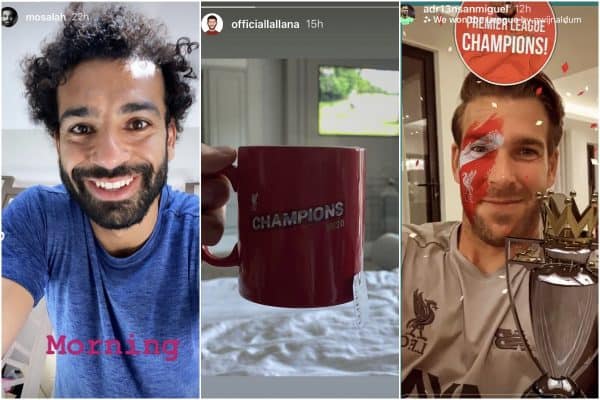 These are images we have all longed to see over the years and each and every player deserves time in the spotlight to soak up the occasion but as the skipper said, the job is not over yet as there are still seven games to go and countless more records to break.

Bale and Lo Celso on the bench...

Tottenham face Burnley in the Premier League on Monday night aiming to bounce back from last...
Read more

The limited number of fans attending an Atlanta United game in person for the first time since March will, if the last...
Read more

Tottenham face Burnley in the Premier League on Monday night aiming to bounce back from last...
Read more

For years we’ve been treated to Real Madrid and Barcelona having two of the best sides in the world as they face off, but...
Read more

The limited number of fans attending an Atlanta United game in person for the first time since March will, if the last...
Read more