Former Liverpool and Chelsea favourites are among players with Champions League experience who currently find themselves without a club.

The impact of the financial losses caused by football’s recent postponement on the transfer market is yet to be seen, but clubs may now be looking at players available on a free transfer with more interest.

We’ve taken a look at five more established names who are unattached at the time of writing.

It doesn’t seem quite right that only a year ago Sturridge was collecting a Champions League winners’ medal with Liverpool after their victory over Tottenham in the final in Madrid. Three days later, the England international – that feels an awfully long time ago, too – was released upon the expiry of his contract at Anfield.

A move away from the goldfish bowl of English football appeared the best choice for all involved. Seven goals in 16 appearances for Turkish outfit Trabzonspor followed, but then Sturridge’s contract was mutually terminated in March as it was confirmed he had been suspended from football for four months after instructing his brother to bet on him joining Sevilla (it’s good to know he’s as good a gambler as us).

With his ban expiring on June 17, it remains to be seen what the future holds for the 30-year-old. We’d quite like to see him being brilliant again.

Newcastle United fans who witnessed Doumbia’s three substitute appearances and zero goals as the club suffered relegation in 2016-17 may find it hard to imagine the striker ever appeared in the Champions League.

But Doumbia actually thrived in the competition for a period at CSKA Moscow, and his Champions League record reads 15 goals in 31 appearances, including strikes against Inter, Arsenal and Manchester United, as well as five goals against Manchester City.

He is currently without a club after he was one of nine players sacked by FC Sion having refused to take a pay cut.

We saw him play at Middlesbrough last year and it generally looked like someone had put a fridge in the middle of midfield, but Tony Pulis and Boro fans seemed to like him, so what do we know?

Another player recently sacked by Sion, Song probably hasn’t boosted his chances of finding a new club after admitting he “didn’t give a f*ck” he was unlikely to play at Barcelona after leaving Arsenal because he “knew that now I would become a millionaire”.

Still, we’ll always have that time he briefly turned into Cesc Fabregas. 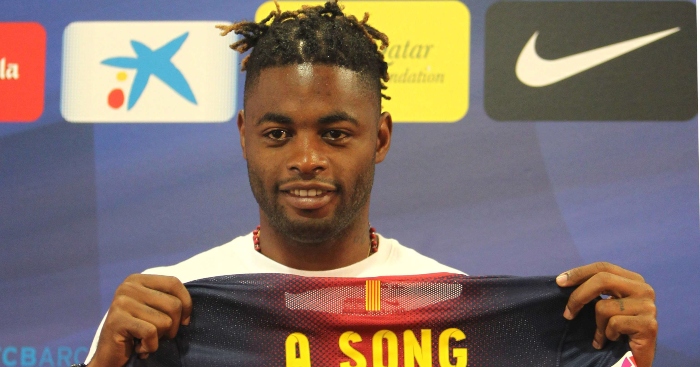 A Milan stalwart, Abate started his career at the club before returning to spend another decade at the San Siro between 2009 and 2019.

The full-back is now 33 years old but was linked with a move to West Ham in February. His experience and versatility could make him a useful temporary signing.

Where are they now? The last 12 Golden Boy winners: Anderson, Balotelli…

Can you name every player to appear for Liverpool in their 04-05 UCL run?