Chesterfield first-team coach says manager James Rowe’s suspension a ‘bolt out of the blue’, talking for the first time about the decision.

Rowe was suspended on Monday pending an investigation into allegations of misconduct, leaving fans surprised as to why this could have been.

Days on, we are still to hear any further details and how long this could go on for, so with Danny Webb at the helm for the time being, questioned were asked as he gave his pre-match press conference.

The Spireites are getting set to play managerless Eastleigh on Saturday afternoon, looking to try and go back to the top of the table, keeping pressure on Stockport County.

Asked by Derbyshire Times how he reacted when he was told, Webb said: “I was surprised, you don’t expect to see a statement of your manager being suspended for the time being. But it has happened. It is a bit of a bolt out of the blue but once you know the score and you realise you have got to take training the next day you have have to try and put it to the back of your mind.”

Webb, who was told about Rowe’s suspension an hour before the news was made public, revealed that the board held a meeting with the players to ‘reiterate’ the club statement.

Webb added that he ‘did not know anything’ about whether the police are involved.

“The club has made a statement and until that investigation is complete and due processes are complete my job is to crack on and take the game on Saturday,” he explained. It is the old saying of ‘each day as it comes’ at the moment. That is as far as I know. I am prepared to work with the players and help the club at this unusual time.

“I was asked if I would be prepared to take training on Tuesday and potentially the rest of the week and that is all it has been so far. I have been in football a long time and sometimes these things happen that get thrown upon you and you have to rise to the challenge and get on with it. That has not been a problem for me as such because I have done it before in a spur of a moment, day-by-day thing. At the moment, I am in the same boat as everyone else.”

“I think one of my strengths is to keep people motivated and upbeat and that has not really been an issue because we have got such a good set of players who have been assembled,” Webb said with the team training at Loughborough University pre-planned this week. 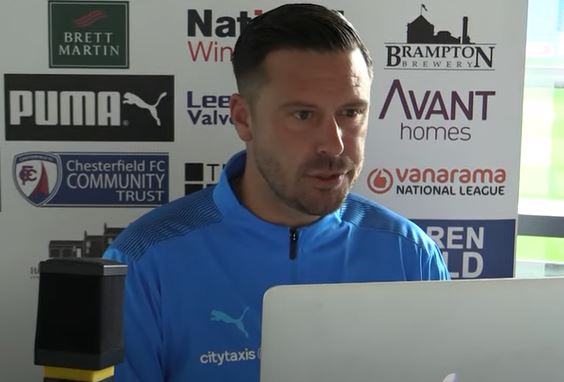 “They are the best set of lads I have been around in a dressing room whether it be as a player to a coach. They are very focused, we have got some good senior pros that even if I was not taking training they would not allow the focus to go off Saturday’s game.

“Training sessions have been lively, have been sharp. In terms of the mood around it, I have probably distanced myself a little bit more than usual from the players because I am usually the bridge between the manager and the players and obviously me being the one to lead training this week I have had to sort of get my head on it and have a really good think about what we are doing.”

Meanwhile, a video has emerged on Twitter, and in it is alleged to be James Rowe having a row during the game against Maidenhead United last week.

It was posted just hours after the club statement on Rowe’s suspension, and this lead to many fans thinking this could have been the reason, although not officially confirmed.

It’s been played over 85,000 times throughout the week and since done the rounds on various other social media sites. Is it his voice? Could he really have removed from position due to a spat on the touchline?

Nonetheless, until something official comes to light on why the decision was made, fans remain loyal, hoping that he can come back and continue the title charge.

🗣 I’ll bite your fucking nose off is an interesting quote of his , personally I prefer the 18 yard entries one. pic.twitter.com/dAaEb6Xmzd

It’s also worth noting that Chesterfield’s transfer plans have been ‘paused’ until the situation with manager James Rowe has been ‘resolved.’

Webb said: “That is a difficult one because the manager does the recruitment with our recruitment team and obviously those things have probably hit the pause button at the moment.

“The club will reassess everything after the weekend.

“In terms of recruitment, I can’t give you any answers on that.

“My job is day-by-day, taking training and leading the team tomorrow down at Eastleigh and then it will get reassessed.

“The board is happy and willing for me just to do that day-by-day until things get resolved.

“In terms of signings, that is not happening at the minute. Going forward, who knows. But at the time being I think the pause button has been hit on anything that was planned.”

@jakeharrison22: Imagine if all this is just to keep kabongo

@DazzaYT: From that, looks like could be good news and he’s taking time away to reflect on whatever

@fatcarl2: I did think this was the one ‘positive’ to come out of this. Total distraction from any offers coming in, and do we really need to strengthen

@George_CFC_: jokes on you we faked a manager suspension so we can’t sell kabby

@WillHpwl_: Out of the blue for those that haven’t interacted with him… not for the majority it seems.

Credit to Danny Webb this morning. Not an easy position to be in. Appreciated that we had questions about the current situation. Answered them the best he could. Professional and assured. I’d say the #Spireites are in safe hands as it stands.